The First Bowl Trip: One For The Ages (The Game)

On Jan. 1, 1925, Notre Dame met Stanford in the 11th Rose Bowl. It was a battle between two coaching legends as Knute Rockne’s 9-0 Notre Dame squad met Pop Warner’s 7-0-1 Stanford team. The Fighting Irish took advantage of several Stanford turnovers and won 27-10 to earn the program’s first national championship. In this ‘Strong and True’ moment, look back on Notre Dame’s first bowl game through the excerpt by author Jim Lefebvre and accompanying images from the University of Notre Dame Archives.

January 1, 1925 began in customary fashion in Pasadena with the annual Tournament of Roses parade, a colorful assemblage of pageantry attracting tens of thousands of viewers to the city’s streets. The 53,000 seats of the Rose Bowl stadium were filled a half hour before the scheduled kickoff. In the hills surrounding the valley, thousands more onlookers took their spots alongside the eucalyptus trees. For millions of fans across the country, the game would enter their homes via radio broadcasting, “the first time in radio history that Eastern stations have broadcast direct a Pacific coast event.” Across the Midwest, telegraph offices in countless towns and cities planned to remain open on the holiday to receive reports from Pasadena. By all accounts, the game would be the most widely followed in the history of football.

Rockne continued the season’s strategy of starting the Shock Troops – a complete second unit meant to take some of the energy out of the opposition’s starters. They kept Stanford off the scoreboard on its first possession, even nailing Stanford star Ernie Nevers for a loss on a fake double-pass. Now it was time for the regulars; the crowd roared as they saw the “horsemen and mules” take the field. But on a fourth-down pass attempt, Harry Stuhldreher was clobbered, and lay crumpled on the turf. Shortly after, tackle Joe Bach suffered an injury the Irish believed to have been caused by a steel brace worn on a Stanford player’s knee.

Everything tried by old “Pop” Warner, Stanford’s wily coach, seemed to be working. He was especially fond of plays that kept Cardinal backs wide in the backfield for a pass, then upfield once they had the ball. But the Irish were spotting the pattern. On a third-and-five from deep in Irish territory, Nevers faded and attempted a cross-field pass. Elmer Layden anticipated this play and perfectly timed a leap between two Cardinal targets. The ball hit his shoulder and bounced a few feet over his head. But Layden kept his eye on the ball, snared it in his arms and sprinted for a 78-yard touchdown giving the Irish a 13-3 lead. Later, Stanford bobbled a punt by Layden, and Ed Hunsinger returned it 20 yards for a TD. Another huge Stanford miscue had resulted in Notre Dame’s 20-3 lead.

Stanford cut the lead to 20-10 and was driving relentlessly. By now the brilliant sun had dropped behind the mountains and the chill of nightfall hung over the stadium. On each play, the throngs roared. The Cardinal had fourth down inside the 1-yard line. Nevers took the snap, smacked into the ND wall and fell forward. Stuhldreher ignored the piercing pain in his ankle and drove his 152-pound frame into the pile. The stack of gridders was untangled and revealed the football – less than six inches short of the goal line. Notre Dame ball. Stanford hearts sank.

Stanford’s last-ditch comeback effort was thwarted by two more ND interceptions, first by Jim Crowley and then another returned 63 yards for a TD by Layden, providing the final 27-10 margin. The gun sounded and the battle of the ages was history. Notre Dame had survived the knockout punches of a great opponent, made the most of its opportunities and capped its most memorable season to be truly crowned with glory.

The return trip started with several days in the Bay area, followed by celebratory stops in Salt Lake City, Denver, Cheyenne, Wyoming, and Lincoln, Nebraska, before returning to Chicago and finally campus.

Excerpted from Loyal Sons: The Story of The Four Horsemen and Notre Dame’s 1924 Champions, by Jim Lefebvre. Used with permission of Great Day Press.

A ticket from the 1925 Rose Bowl between Notre Dame and Stanford. To this day, it is the only Rose Bowl game the Fighting Irish have ever played. 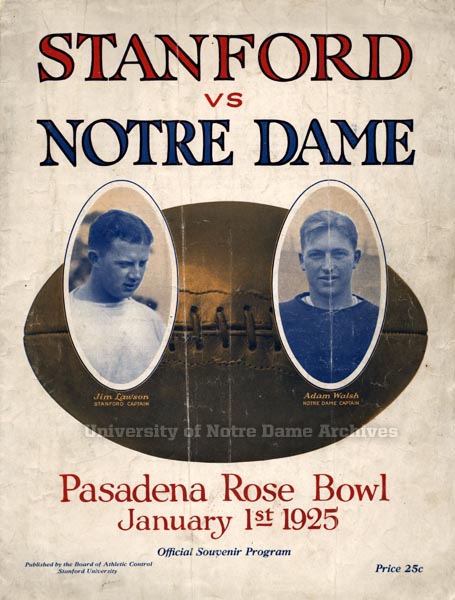 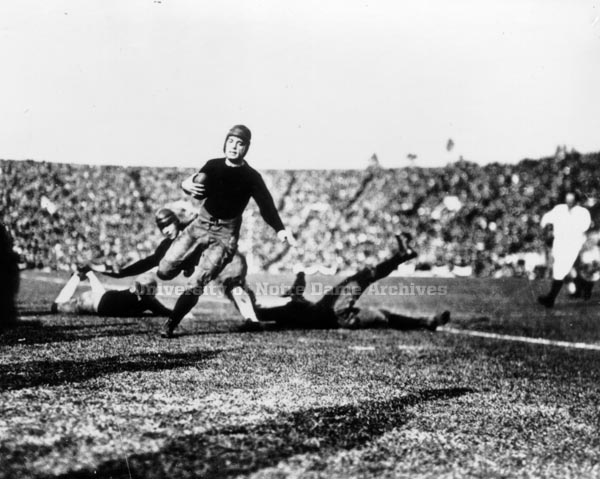 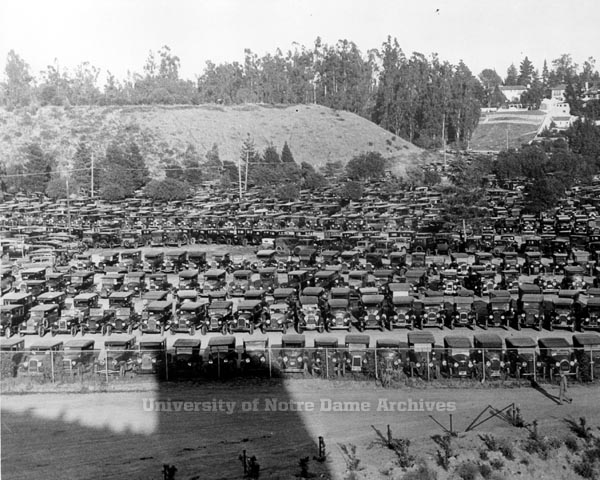 View of the cars parked outside the stadium on game day between Notre Dame and Stanford. 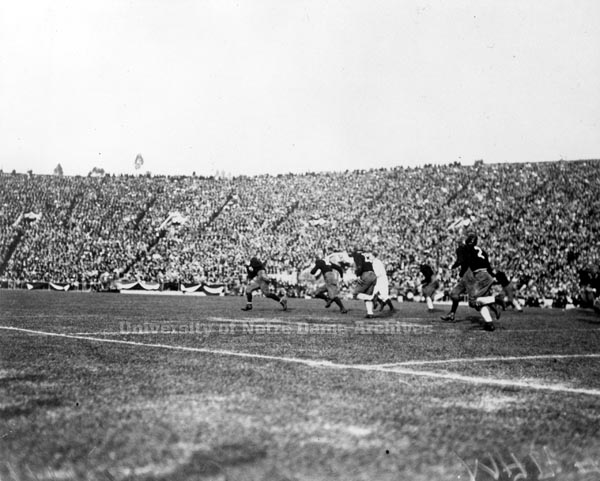 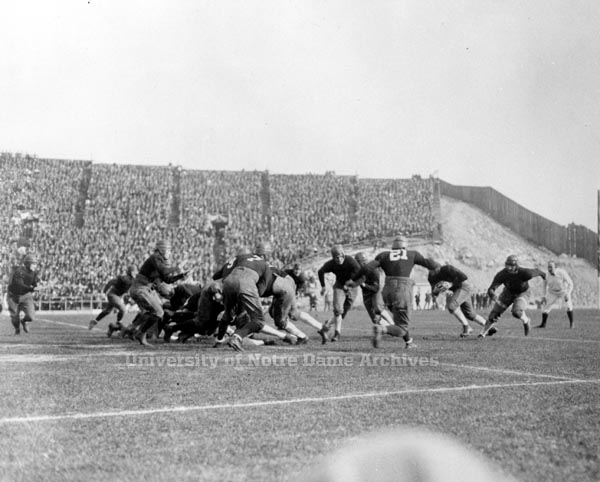 Scene from the 1925 Rose Bowl between Notre Dame and Stanford. 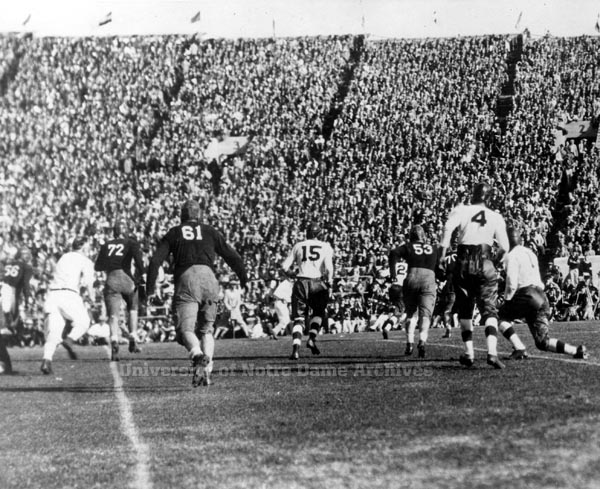