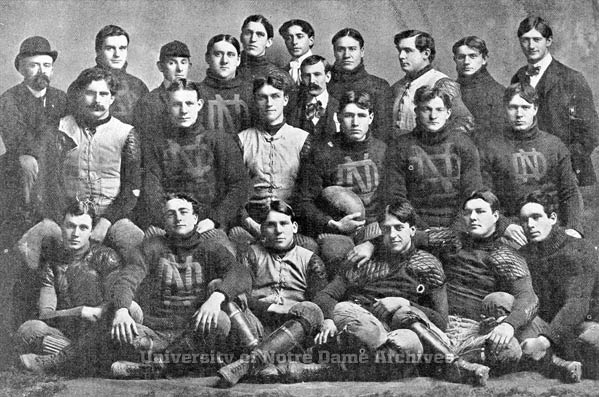 The 1901 Notre Dame football squad outscored its opponents 145-19 and finished the season with seven straight wins.

Though the Fighting Irish did not win a national championship until the 1924 season, it was during the 1901 campaign that Notre Dame earned its first significant team honor. With wins over both Purdue and Indiana, Notre Dame claimed the state title. After beating the Boilermakers, 12-6, the Irish clinched the crown with an 18-5 victory against the Hoosiers. The following excerpt, written by J. Patrick O’Reilly, was originally published in the Nov. 23, 1901 issue of Scholastic, the university’s student magazine.

Nine rahs for Coach O’Dea, Captain Fortin, and the moleskin heroes who struggled so nobly for the Gold and Blue; and on last Saturday won for us the championship of Indiana. For the first time in years, the much-mooted question of supremacy among the Indiana colleges has been satisfactorily settled, Notre Dame winning a clear title by defeating both Purdue and Indiana. The “Big Three” fight aroused great enthusiasm, and the race for the title was closely followed by every football enthusiast in the State.

Despite the drizzling rain which had fallen all morning, the field was in the best of shape. The two elevens were in splendid condition; about equally matched in weight, and both determined to win. The crowd was one of the largest and most enthusiastic of the year, and the rooting was of a high order. All in all, every requisite for a good game was present.

The game was one of the fiercest and cleanest ever seen on Cartier Field. There was no unnecessary roughness, and although every inch of ground was desperately contested, the officials were obliged to inflict penalties but twice. On the defensive, the State representatives displayed a stubborn resistance, but they were unable to impede the progress of our speedy backs, and their offensive tactics availed nothing against our impregnable line and alert ends, never retaining the ball longer than two or three downs. Their only touchdown was in the nature of a fluke, Foster securing the ball on a fumble during a scrimmage, and sprinting thirty yards to Notre Dame’s goal while our men were extricating themselves from the heap. In marked contrast to Indiana’s poor work was the brilliant defense and offense of our men. The linemen charged well and several times broke through and stopped plays behind the line. Sammon, Doran, Kirby and McGlew were irresistible on the offensive.

Sammon won new laurels by his sensational fifty-five yard run through a crowded field. His line-bucking and punting were very much in evidence all through the game, and he established himself as a hero with the rooters, but he was not the only one. Pick’s fearless tackling and work at centre; McGlew’s clever interfering and accurate passing, and the superb defense of the linemen. Gillen, Faragher, Winter and Capt. Fortin made the hearts of the rooters dance with joy. Doran and Kriby crashed and plunged through and round Indiana’s line, making five and ten yards on every attempt, while their work on interference was the best of the season. Lins, Lonergan and Nyere, at the ends, were down the field on every punt and generally nailed the main in his tracks. Foster, Clevenger and Elfers were Indiana’s stars. Clevenger and Foster tackled well and were in every play and under every rush. 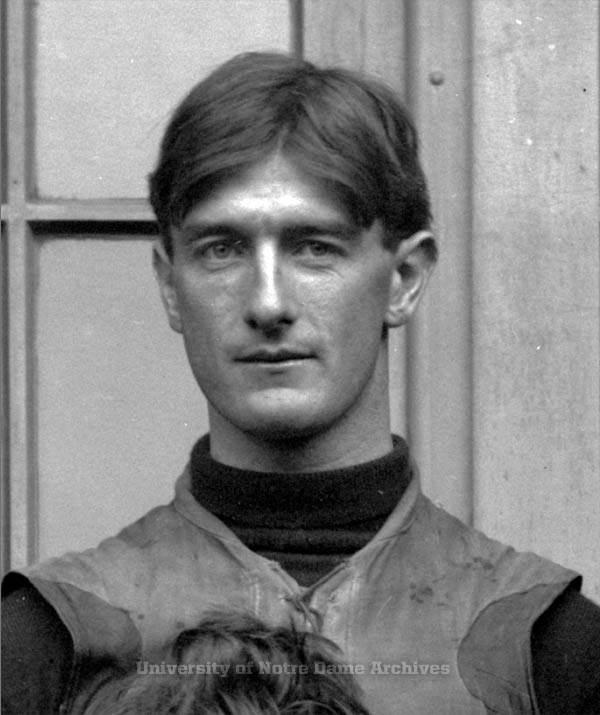 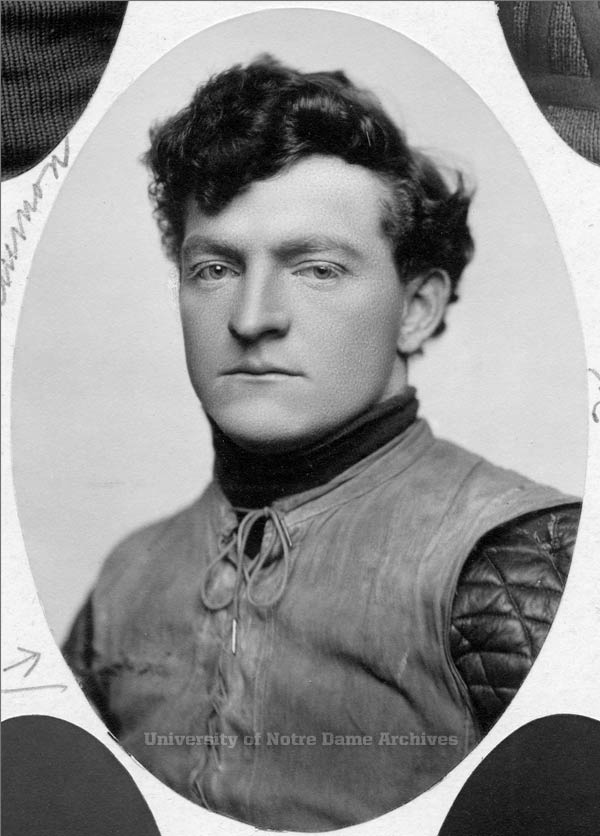 Louis “Red” Salmon was a four-year starter at Notre Dame, including three seasons at halfback. He had his best performance as a senior in 1903, when he captained the team and was named a third team All-American by Walter Camp. 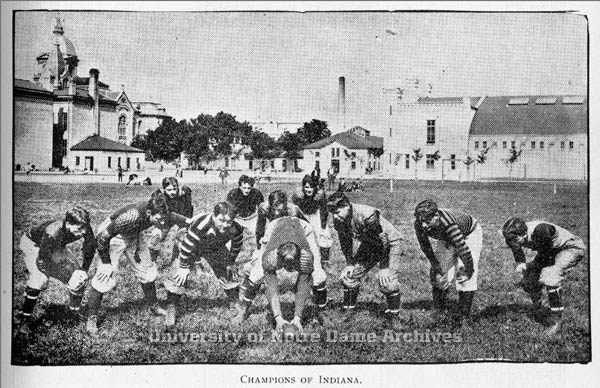 The 1901 state championship team poses for a photo on campus. The Main Building is off in the distance on the left. 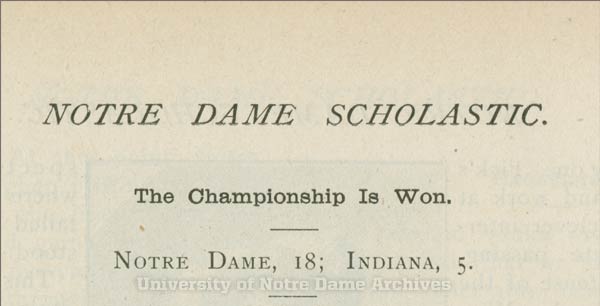 After a win over Indiana, a Scholastic headline declared Notre Dame had won the state championship.