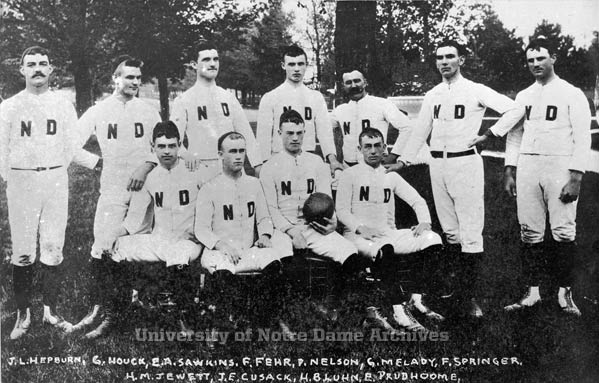 On Nov. 23, 1887, nearly 45 years to the day after Rev. Edward Sorin, C.S.C., arrived in northern Indiana, the University of Notre Dame fielded a collegiate football team. Originally published in Scholastic, the University’s student magazine, the following article describes the scene of the inaugural contest. The photos are among the earliest athletics images in the Notre Dame Archives.

For some days previous to Wednesday great interest had been manifested by our students in the football game which had been arranged between the teams of the Universities of Michigan and Notre Dame. It was not considered a match contest, as the home team had been organized only a few weeks, and the Michigan boys, the champions of the West, came more to instruct them in the points of the Rugby game than to win fresh laurels.

The visitors arrived over the Michigan Central RR., Wednesday morning, and were at once taken in charge by a committee of students. After spending a few hours in “taking in” the surroundings, they donned their uniforms of spotless white and appeared upon the Seniors’ campus. Owing to the recent thaw, the field was damp and muddy; but nothing daunted, the boys “went in,” and soon Harless’ new suit appeared as though it had imbibed some of its wearer’s affinity for the soil of Notre Dame.

At first, to render our players more familiar with the game, the teams were chosen irrespective of college. After some minutes’ play, the game was called, and each took his position as follows:

On account of time, only a part of one inning was played, and resulted in a score of 8 to 0 in favor of the visitors. The game was interesting, and, notwithstanding the slippery condition of the ground, the Ann Arbor boys gave a fine exhibition of skilful [sic] playing. This occasion has started an enthusiastic football boom, and it is hoped that coming years will witness a series of these contests.

After a hearty dinner, Rev. President Walsh thanked the Ann Arbor team for their visit, and assured them of the cordial reception that would always await them at Notre Dame. At 1 o’clock carriages were taken for Niles, and amidst rousing cheers the University of Michigan football team departed, leaving behind them a most favorable impression. 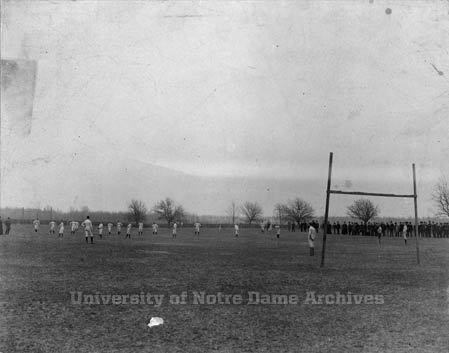 Amidst melting snow and muddy conditions, the entire Notre Dame student body showed up for the game that was played on “senior campus field.” 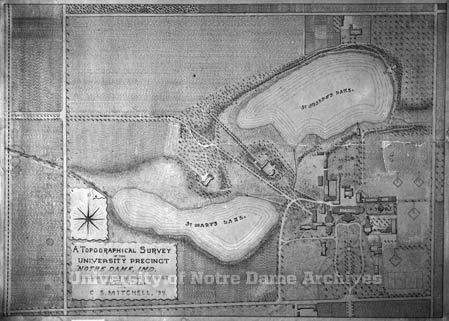 This map depicts Notre Dame’s campus in 1894, seven years after the first football game. There is no way of telling if the field on this map was in the same location in 1887, but it suggests that “senior campus field” may have been located near present-day Crowley Hall of Music and Riley Hall of Art and Design. 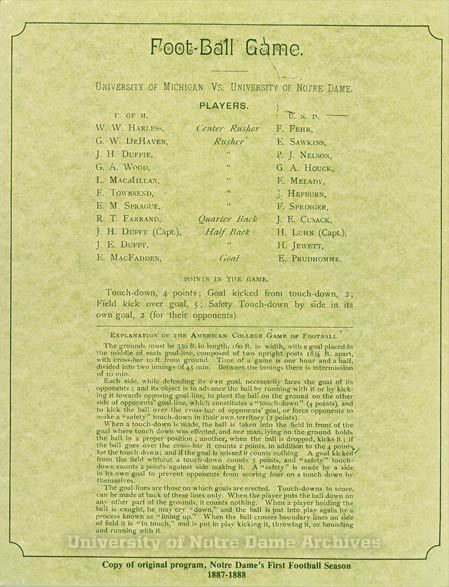 The first Notre Dame program featured team rosters and a rules explanation of the “American college game of football.”