On Friday night before Notre Dame’s 1969 game against USC, former Irish running back Rocky Bleier (’68) spoke at the pep rally, following his return from serving in the Vietnam War. Wounded in action, doctors told Bleier he would not play football again, but the Appleton, Wis. native persevered and went on to become a four-time Super Bowl champion with the Pittsburgh Steelers. The photos below are from the University of Notre Dame Archives and the accompanying “God, Country, Notre Dame” video was produced by Fighting Irish Digital Media as part of the 2011 Shamrock Series pre-game show at FedEx Field in Washington, D.C. Bleier, and Mike McCoy (’70) also recalled the moment in Steve Delsohn’s 2001 book, Talking Irish: The Oral History of Notre Dame Football.

“I remember when Rocky came back from Vietnam. He spoke at our pep rally before the USC game. He had crutches and half his foot was bandaged. It was in the old field house. When Rocky came out, the roar was deafening. It was very emotional. I’ll never forget it.” – Mike McCoy, from Talking Irish: The Oral History of Notre Dame Football

When Bleier visited campus on Friday, he ran into Colonel Stephens, the former commander of Notre Dame’s ROTC, who asked him to present the flag on Saturday, and speak at the pep rally later that evening. Though he insisted that he did not want to speak, the Colonel eventually convinced Bleier to say a few words. Later that evening, after head coach Ara Parseghian and Notre Dame’s captain spoke, Bleier was introduced as a former captain coming back after serving in the military.

I said, ‘It’s been two years since I stood here before you as a team captain. Over that time, some good and bad things have happened to me. One of the good things is that I met a group of people much like yourself…with the same dreams and aspirations we all have when we are young. The bad thing is that, unfortunately, I had to leave some of those people on the battleground of Vietnam.’ Then I got to thinking of some of those people. I started choking up. My stomach was in my throat. I said, ‘What I would like to do is dedicate tomorrow’s game in their honor and memory…’ Then I started crying. And nobody said anything. Ara just came over and sat me down. There was a cheer, and the fight song started playing, and everybody dispersed at that moment in time. And I felt kind of bad, because I put a hush on their big game. – Rocky Bleier, from Talking Irish: The Oral History of Notre Dame Football 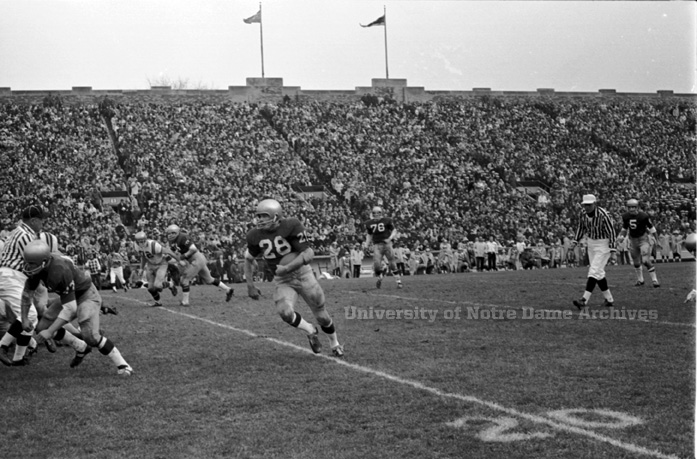 Rocky Bleier, ’68 runs with the ball during the Irish’s game against Navy in 1967. 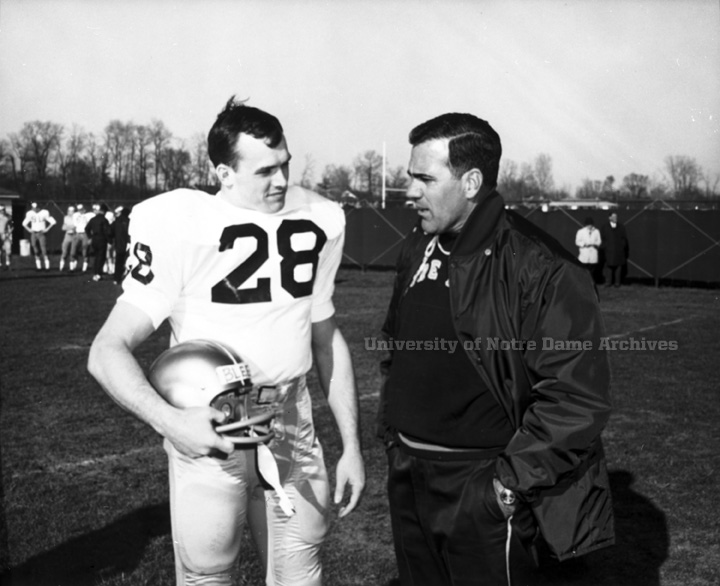 Head coach Ara Parseghian talks with captain Rocky Bleier on the sidelines at practice in 1967. 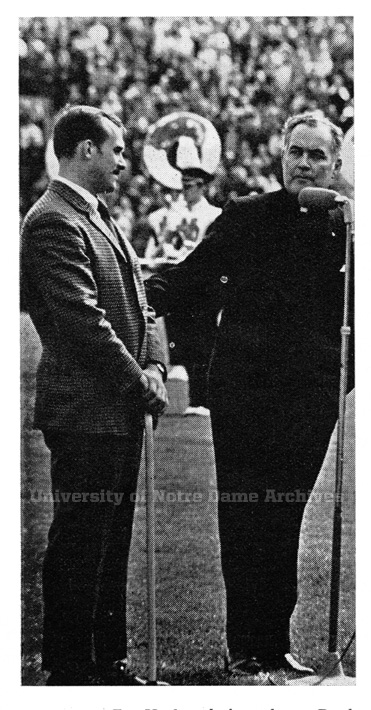 University President Rev. Theodore Hesburgh, C.S.C. introduces Bleier at halftime of the 1969 football game against USC. Bleier had just returned from the Vietnam War, where he had been injured.