This Day In History: Irish Topple a Nemesis 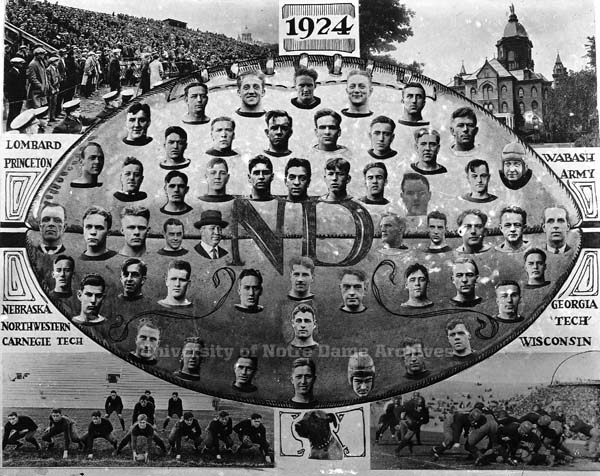 On Nov. 15, 1924, Notre Dame met Nebraska at Cartier Field on campus. Knute Rockne’s team sought to avenge a pair of consecutive crushing losses at the hands of the Cornhuskers. Behind the strength of the Four Horsemen, Notre Dame outscored Nebraska 20-0 in the second half to earn a 34-6 victory. The win improved Notre Dame’s record to 7-0, and set the Fighting Irish on the path to their first national title, which was capped by a win over Stanford in the 1925 Rose Bowl. In this ‘Strong and True’ moment, look back on the 1924 season through images from the University of Notre Dame Archives and an excerpt by author Jim Lefebvre, revisiting the game that may have changed the course of Notre Dame football history.

Ever since the 1924 schedule was released, Coach Knute Rockne’s players were intensely focused on November 15 and the chance for revenge with their prime nemesis of the past two years — Nebraska. In the Irish dressing room, lockers were adorned with signs such as:

In 1922 and ‘23, the Irish players had to contend with the talented Cornhuskers and with the incessant anti-Catholic taunts of the Nebraska fans. Each Irish visit to Lincoln, it seemed, was greeted by a mob more vociferous in its antagonism. Students and townspeople kept up the banter around Notre Dame’s hotel. “Beat the Papists” and “Maul the Mackerel Snappers,” the cries went.

On Thanksgiving Day, 1922, Notre Dame brought an 8-0-1 record to Lincoln, but fell, 14-6. In 1923, the Huskers won, 14-7, the only blemish on Notre Dame’s 9-1 record. After that game, nobody was more disappointed than Irish quarterback Harry Stuhldreher. He had played his heart out, completing several passes and intercepting three Husker aerials. He swore to himself that day, and to his teammates, that “we would beat Nebraska in 1924, even if we lost every other game” of the season.

A lot had transpired by the time the teams met again. Notre Dame tore through its first six opponents in 1924, most recently thrashing Georgia Tech, 34-3, and Wisconsin, 38-3. Rockne’s “Wonder Team” with its “Four Horsemen” backfield was picking up admirers from coast to coast.

The Irish, one writer said, had two obligations in the Nebraska game: “One to themselves to wipe out the defeats of the past two years, and the other to the men who built up Notre Dame’s football traditions during a period of 36 years.” Perhaps never before, it was suggested, “did the reputation of a football team depend so much on the outcome of a (single) game.” A third consecutive loss to the Huskers – before an expected record crowd at Cartier Field, with this team of seniors – was too much for many Irish fans.

From around the Midwest, fans flooded into South Bend, packing hotels and private residences. Ticket requests were unprecedented. The South Bend Chamber of Commerce, in an open letter, proclaimed that “(crowds) are coming to see the greatest exhibition of football in history. And at this time we cannot too highly stress the great spirit of hospitality which has always been shown by the people of South Bend to visitors in our city.” Indeed, upon the Cornhuskers’ arrival, they were greeted as heroes, and feted in a pep rally that featured “the wildest cheering that ever resounded in the Notre Dame gymnasium.”

On game day, the wild cheering was reserved for the triumphant Irish. Stuhldreher was injured but gamely fought on, aided by his mates Crowley, Miller and Layden. The Irish led, 14-6, at halftime, then put on one of the greatest displays in the history of the old field, pulling away to destroy Nebraska, 34-6, amid a constant din from the wooden grandstand.

Tired. Relieved. Vindicated. The greatest team in Irish history trotted happily to its dressing room. There, an eerie silence prevailed. “When the fellows entered the dressing room,” one of the star backs explained, “they couldn’t talk, they were so happy over the victory.”

(The preceding is excerpted from Loyal Sons: The Story of The Four Horsemen and Notre Dame Football’s 1924 Champions, by Jim Lefebvre. Used by permission of Great Day Press.) 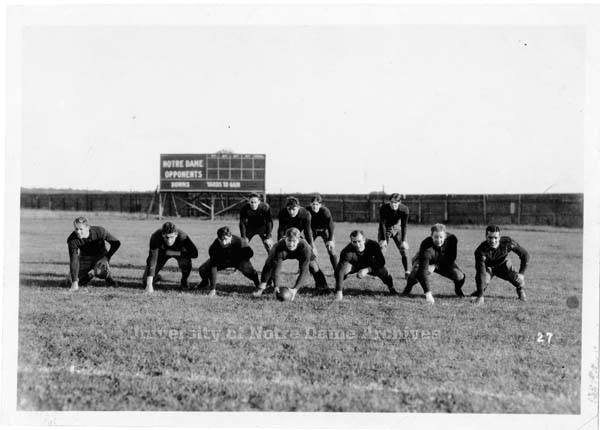 Members of the 1924 Fighting Irish football team at Cartier Field, the team’s home venue before Notre Dame Stadium was built. 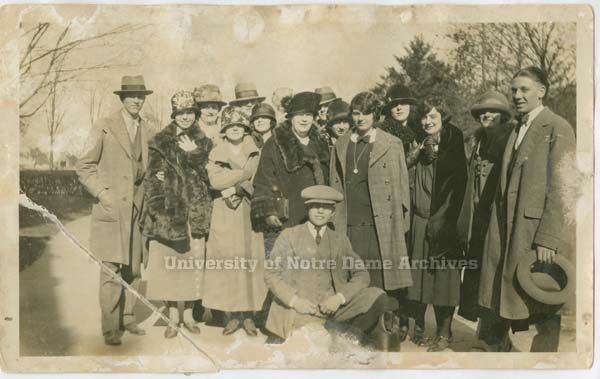 Students and visitors gathered on campus before a home game in 1924. 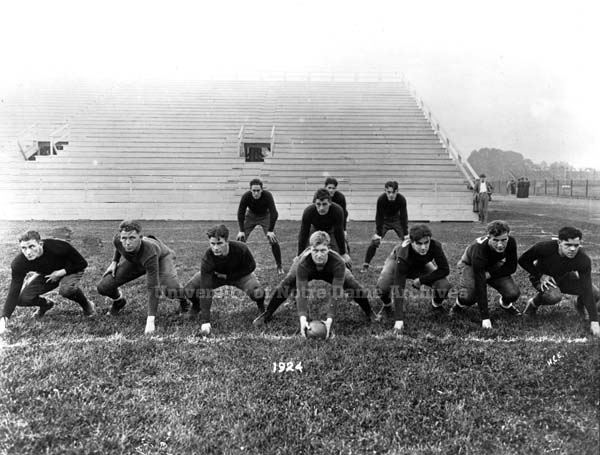 In 1924, the Notre Dame starting offense was known as the Four Horsemen and Seven Mules.