After coaching the Fighting Irish for three seasons, Frank Leahy (’31) entered the Navy as a lieutenant in 1944. Leahy returned to coaching prior to the 1946 season, beginning a stretch in which Notre Dame did not lose a single game for four straight years. The following article excerpts were published in Scholastic in May 1944. The accompanying photos are courtesy of the University of Notre Dame Archives and Media Relations offices.

The transition in uniforms from moleskins to the navy blue has been made by Frank Leahy, Notre Dame’s head coach and director of athletics who has been given leave from the university for the duration, as he took up his 60-day indoctrination course at Princeton University on Thursday morning. Mr. Leahy entered the service with the rank of senior lieutenant.

Last Sunday afternoon, in a concert sponsored by the United States Rubber Company, in Carnegie Hall, New York City, Mr. Leahy spoke to the youth of America. The occasion was the presentation of a young people’s concert by the New York City Philharmonic Orchestra, under the direction of Arthur Rodinsky…

In his talk to the children, Lieut. Leahy recalled that the late Knute Rockne had taught him a lesson never to be forgotten. It concerned the fact that his football players were going into the world, shining with football glory and that many positions as head coaches would be offered them. Mr. Rockne asked his players not to take these jobs immediately, because they were not prepared to assume such responsibilities.

He urged them, however, to continue to prepare themselves until such time as they were capable of assuming these responsibilities. Lieut. Leahy then applied the advice of Mr. Rockne to his young audience, urging them to keep in mind the day when they would be called upon to assume serious responsibilities, and so prepare themselves now by studies, hobbies and sports.

He compared the nation to three teams: the soldiers in the field; the men at home on the production line; and the youth that tomorrow must take the place of other two teams. “Be ready,” he said, “when you have to trot out onto the field. We of the first and second teams will cheer you on because we know that American youth cannot, and will not, be beat.” 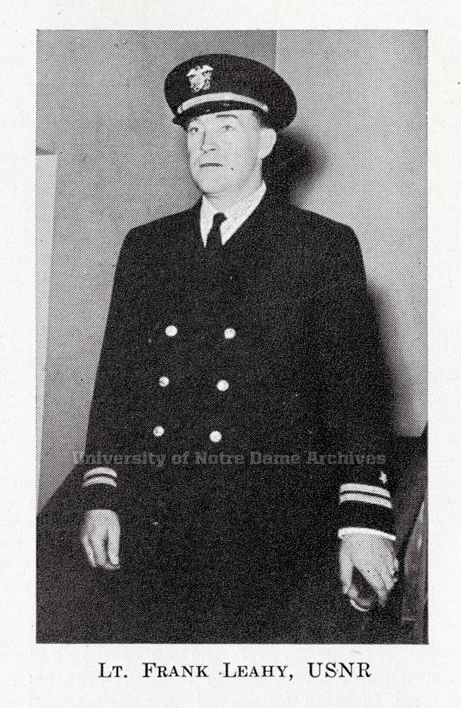 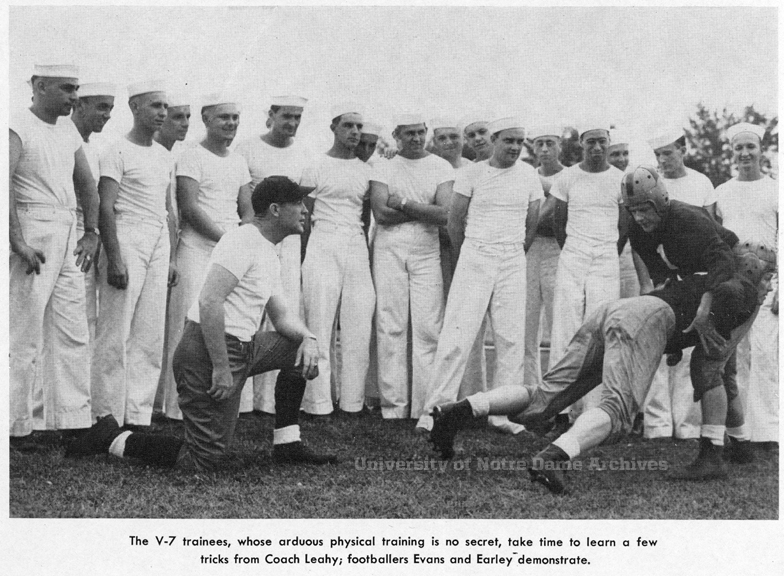 Leahy teaches football to Navy cadets who were on campus for military training during World War II. 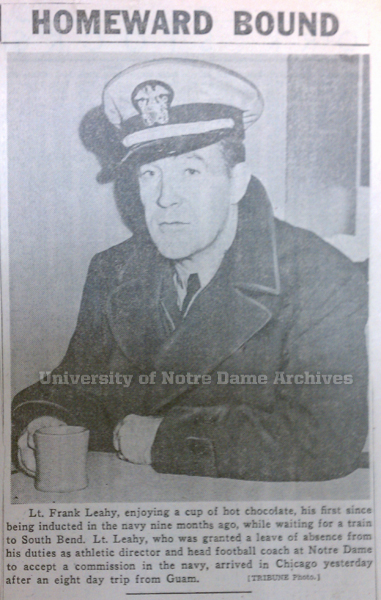 The Irish head coach preparing for a return trip to South Bend. 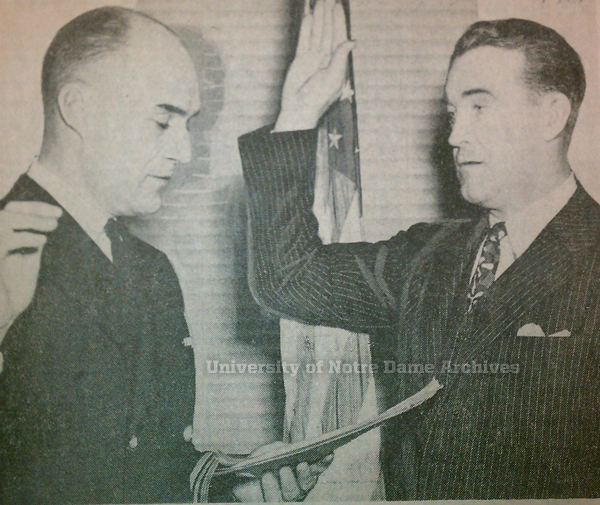 Frank Leahy is sworn in as a Naval lieutenant.