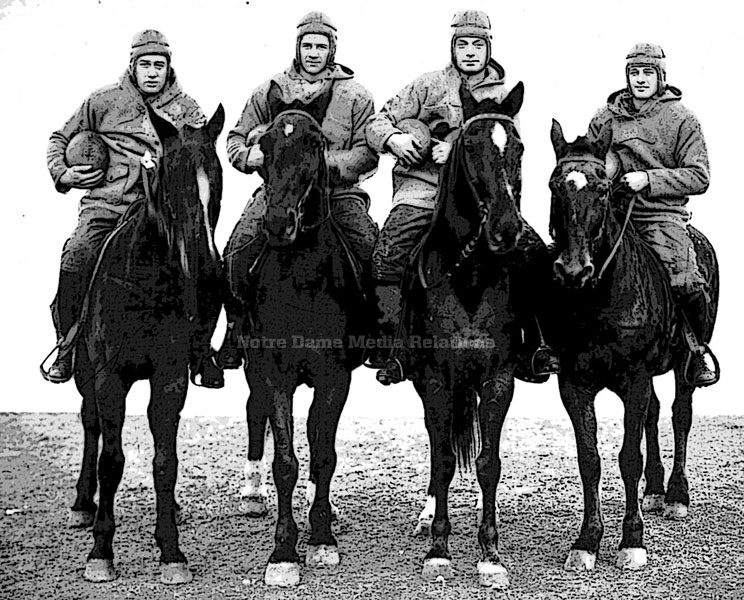 On Oct. 18, 1924, Knute Rockne’s Notre Dame squad took on Army at the Polo Grounds in New York City. Led by the backfield of Harry Stuhldreher, Don Miller, Jim Crowley, and Elmer Layden, the Irish upset the Black Knights, 13-7. After the game, New York Herald Tribune sportswriter Grantland Rice penned one of the most famous ledes in sports history. Rice’s iconic memorable headline appeared in the paper’s evening edition, as well as the Sunday, Oct. 19 printing. The Four Horsemen helped lead Notre Dame to its first ever national championship, and the quartet of backs became college football icons. In this ‘Strong and True’ moment, author Jim Lefebvre revisits the historic game and the birth of the legend of the Four Horsemen.

Saturday, October 18 dawned sunny and pleasant in New York City. By late morning, the subway lines came alive with the bustling activity of college football fans. The sports event of the year was about to unfold amidst the green grass and grandstands of the Polo Grounds. As many in the huge crowd settled into their seats, the ceremony began. To the roar of the crowd, in marched the West Point Band, playing grand marches as they led column after column of gray-clad cadets into the stadium.

Once the game began, many in the huge crowd were mesmerized by the Notre Dame attack that had flummoxed opponents the past three seasons. The shift, and its myriad of fakes and feints, along with cross-blocking in the line, in which Army’s linemen were never sure who would be coming at them, was creating confusion through the West Point defense. The Notre Dame rooters were frenzied as their heroes marched downfield and went ahead, 6-0, as Layden scored.

Up in the wooden press box, newspapermen were marveling at the precision and skill shown by Notre Dame. Grantland Rice, considered the dean of newspaper sports writers, was holding court with Damon Runyan and several other notable scribes. Into this conclave strolled young George Strickler, Rockne’s publicist and South Bend Tribune correspondent. Part of his assignment from Rockne was to keep an ear open for scuttlebutt and analysis from the “big guys” in the newspaper business. The conversation revolved around the exceptional work of the Notre Dame backfield.

“Yeah, just like the Four Horsemen,” Strickler piped up, recalling the Rudolph Valentino film much of the team had watched Wednesday night at Washington Hall before leaving on the trip East. No reaction was noted from among the professional writers.

The second half started and Notre Dame continued its charge. Again, the crowd was buzzing at the tremendous coordination and sophistication of the Irish attack. Notre Dame, lining up quickly, going into the shift and snapping off plays in rapid succession, seemed to be catching the Cadets flat on their feet. A dazzling run by Crowley gave ND the final margin in a 13-7 victory.

Grantland Rice, in the evening twilight and gathering chill, sat at his typewriter in the press box and pondered his opening. Something about Strickler’s halftime comment and the imagery of horses stuck in Rice’s mind when he reflected on the Notre Dame backfield. His fingers hit the typewriter keys:

Outlined against a blue-gray October sky, the Four Horsemen rode again. In dramatic lore they are known as Famine, Pestilence, Destruction and Death. These are only aliases. Their real names are Stuhldreher, Miller, Crowley and Layden. They formed the crest of the South Bend cyclone before which another fighting Army football team was swept over the precipice at the Polo Grounds yesterday afternoon as 55,000 spectators peered down on the bewildering panorama spread on the green plain below.”

A publicity photo – and several more notable victories – followed in the weeks to come.

A football legend had been born.

(The preceding is excerpted from Loyal Sons: The Story of The Four Horsemen and Notre Dame Football’s 1924 Champions, by Jim Lefebvre. Used by permission of Great Day Press.) 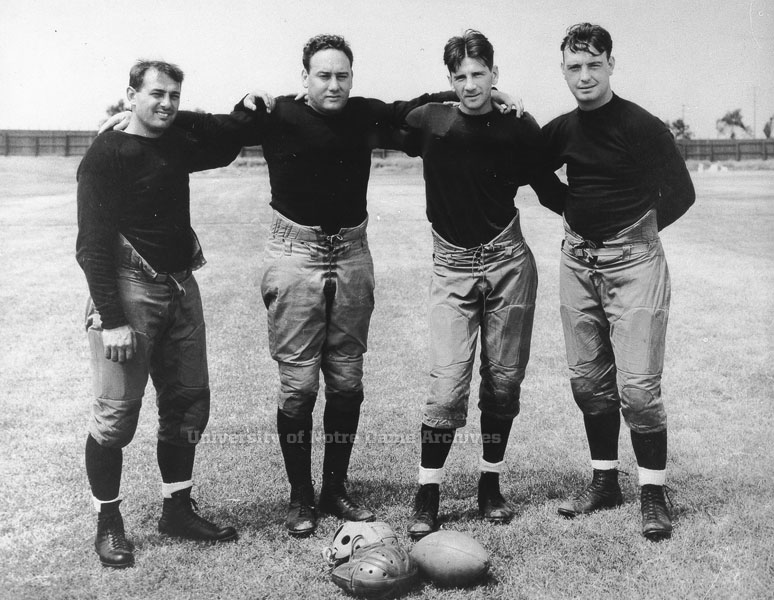 “Outlined against a blue-gray sky…” 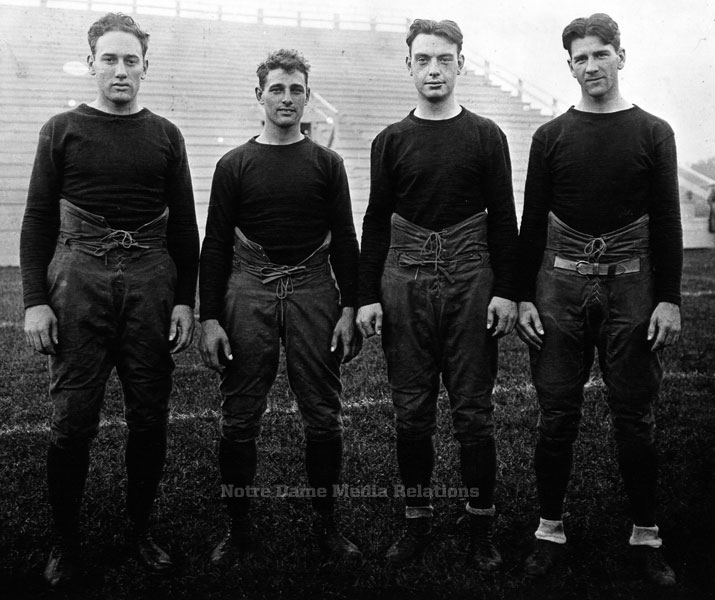 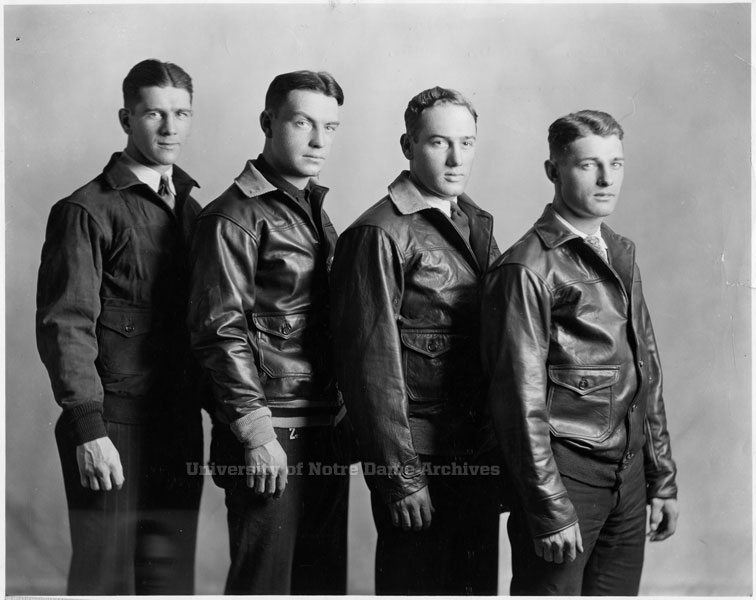 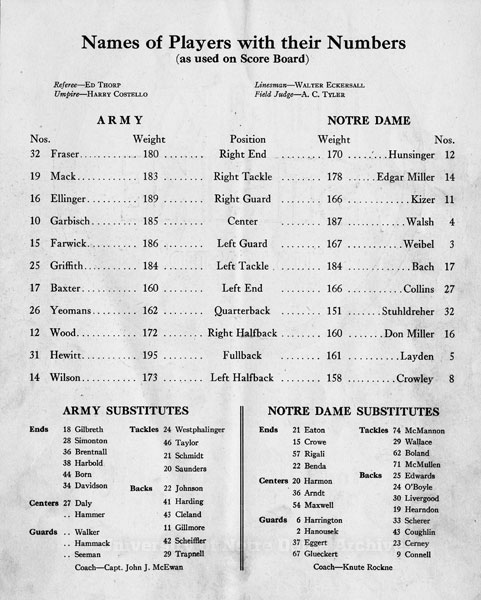